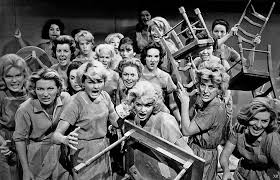 This post was conceived as an impassioned plea on behalf of new fathers to receive more assistance from society (via the government) to allow them the time to bond with their children. But after an incident in a local hair salon* it has become a rant against women.

(*As a side note – any politician who wants to know what the pressing issues are for their female constituents needs to get their arse into a hair dressers or beautician’s chair. I don’t care if your hair is only an inch long and in perfect condition, this is where women talk to women, and where women chatter, issues are aired.)

Let me take a step back and set the scene. I was sitting in a hairdressers chair flicking thought the latest OK Magazine, gossiping about Kate Middleton’s maternity style (ok, sometimes when women chatter nothing meaningful is discussed, but stick with me) when the girl dying my hair told me she was pregnant. I was so excited for her I think I may have squealed aloud. I don’t know what it is about pregnancies and engagements – they just excite and delight everyone even if they are random strangers – or so I thought. However the girl (perhaps a little overwhelmed by my excitement wondering if I thought I was going to be made godmother or something) informed me that no, in fact not everyone was excited about pregnancies, and proceeded to tell me that she had told several of her regular clients that she was pregnant, and far from congratulating her, they were actually very put out. The manners their Mamma taught them made them grind out an ‘Oh how wonderful for you’ through gritted teeth and then straight away ask ‘when will you be gone and more importantly when will you be back’ – words which if said in an office would evoke the same sort of shocked silence a racist slur would arouse, so absolutely known is it that that is not the correct response to happy news.

But not here. Everyone surrounding waits for this young girls reply. She hesitantly admits (admits!) that she is due December 23rd, so she is finishing up December 8th, two weeks before her due date as set out in the legislation, (bearing in mind that her profession requires her to stand all day long, when I know that at 8 months it was a problem for me to sit all day long, so as far as I’m concerned she is cutting it fine, but there you have it.) ‘So you will be gone for Christmas? So I’ll need to find someone else to do my hair?’ is spat back at her with a scowl that could sour milk ‘Can you not work until Christmas, surely that would be better, a little cash for you going into Christmas.’

At this point I would like to interject with a little context. This is a conversation between two women, two women who know each other, albeit casually, for more than five years. One is an older lady with children, the client, and the other is a younger first time mother who relies on repeat regular clients for her livelihood. In essence this is a conversation between an employer and employee.

And I would like to take this one step further. Let’s take the words of the client and put them into a balding, sweating, middle-aged male business owner and replay the situation; girl tells boss that she is pregnant – boss aggressively questions her plans for leave during the busy season and implies there will be no job for her when she returns to work …. And let it percolate… And now let’s speculate how long (and I mean in terms of minutes) do you think it would take that girl to find a solicitor ready to sue that boss for unfair dismissal on grounds of pregnancy. Not only would the case not take long, and her success guaranteed, but so protected are pregnant women in employment law that I assume she would win big. Even if only a supervisor or colleague had said it I assume that there would be more than pregnancy weight filling out her back pocket.

The double standard at play here is mind boggling to me. How some women safe in regulated office jobs are treated so completely different to those who dared branch out on their own to be self-employed, not by the law, but by the women that surround them.

When I sat down to write this post I was thinking about the Dads. I was thinking how unfair it is that women get several months paid maternity leave and Dads are not even entitled to one day. I was looking to the Danish and Swedish models and thinking why can’t we be more like them? But actually, after the above incident, I have realised that we are actually much further apart than I could have realised. Far from supporting fathers (who are important and I’ll cover that again) we need to start supporting mothers.

Pregnancy, particularly unexpected pregnancies, can cause huge dramatic changes in a person’s life. We as a society need to be assuring young women that of all the things that will change, one thing that will remain secure is their employment. This is not something that a government can change or a law can change, we need to change. We need to stop being so selfish and self-centred and look beyond a minor inconvenience to see the bigger picture, a miracle growing before your eyes. There is going to be a new life, a new person in the world, who will fundamentally change all those around them. And although you might be only witnessing this as a stranger on the outside, the very least you can do is cause no harm. Don’t stress a young mother unnecessarily. Don’t be nasty and let her hear the branch creak below her. Support her. Say honestly and openly ‘Oh how wonderful for you’ – no strings attached. When she is gone, make other arrangements and when she is ready, and her child is ready, and her family are ready, for her to return to work, let her do so, in the same way as is afforded every other woman in the state.

What bothered me most about this incident is that it was woman to woman; mother to mother. As a society we have already decided that it is in our combined interest to protect women and allow them to have children and then return to the workplace. That is why we have such strong laws in the area. But as individuals we have somehow forgotten why our predecessors fought so hard for those laws. It’s not the male dominated culture of the board room, or the non-family-friendly policies of faceless big business, or any of the other excuses that are trotted out by HR journals, at work here. It’s just plain stupidity, ignorance and selfishness. Sometimes that’s more toxic.

Please note the details of this post have been altered to protect the identities of those involved.